The battery manufacturing sector produces storage batteries, often known as secondary or rechargeable batteries, as well as non rechargeable main batteries. Industry goods are used in a wide number of applications, including mobile phones, medical equipment, home appliances, and the automobile and transportation industries. Between 2016 and 2019, despite increased exports and consumer spending, significant research and development investment slowed revenue growth.

However, the COVID-19 (coronavirus) pandemic has reduced consumer spending, reduced exports, and disrupted supply chains, resulting in a 9.6 percent decline in revenue in 2020. As demand for electric cars (EVs) has increased, so has demand for lithium-ion battery packs. As a result, the market has welcomed numerous new entrants specialized in the manufacture of EV battery packs, and the future demand for car batteries is optimistic.

Research forecasts that industry revenue would decline at an annualized pace of 3.3 percent to $10.2 billion over the five years to 2021, including a 6.1 percent rise in 2021 owing to projected increases in consumer expenditure and new vehicle sales. Additionally, profit margins for the sector improved marginally throughout the time, owing to increasing economies of scale.

This trend, however, is predicted to reverse during the next five years to 2026, as domestic output continues to rise and the trade-weighted index starts to reflect a weakening US dollar. The Federal Reserve’s recent decision to maintain low-interest rates is likely to reduce the value of the US dollar, therefore increasing export competitiveness in foreign markets while having the reverse impact on imports in domestic markets.

Additionally, demand for electric vehicles is expected to increase as manufacturers continue to extend their EV and hybrid car lineups. As a consequence, research forecasts that industry sales will climb by an annualized 3.2 percent to $12.0 billion by 2026. Profitability is predicted to stay reasonably consistent throughout the same time span.

The battery manufacturing sector manufactures a variety of batteries, from single-cell alkaline batteries used in flashlights to multi-cell lithium-ion battery packs designed specifically for electric vehicle propulsion. Due to the widespread usage of batteries in a variety of applications, the sector is highly reliant on the general health of the economy.

Recent years have seen continuing growth in demand for electric cars, prompting several battery makers to expand their facilities to satisfy expanding demand. Nonetheless, as demand for lithium-ion batteries surged, exports climbed somewhat during the five years to 2021 as the US currency depreciated. Additionally, falls in battery costs caused a significant loss in industry revenue in 2017, which is largely reliant on battery pricing.

When a result, revenue drops as industry prices fall. Additionally, the severe reduction in economic morale brought about by the COVID-19 (coronavirus) pandemic has had a detrimental impact on industry income, owing mostly to decreased exports and consumer expenditure.

Revenue is predicted to improve in 2021 due to a recovery in consumer spending and supply chain disruptions. Research forecasts that industry sales would decline by 3.3 percent annually to $10.2 billion over the five years to 2021, with a 6.1 percent comeback projected in 2021 alone. The research anticipates a rise in new vehicle sales and overall exports in 2021, which would likely result in improved industry demand.

Battery makers have continued to spend substantially in developing more efficient, longer-lasting batteries in order to increase profits and distinguish their goods from low-cost imports. The US Department of Energy and the US Advanced Battery Consortium often help battery producers. Much of the research over the last five years has been on upgrading lithium-ion batteries, which are often used in electronic gadgets, as well as car stop-start battery technology.

By developing more efficient batteries, businesses may charge a premium for them and make more money. The key source of growth in the sector is the research and production of lithium batteries. However, this rise has been substantially negated by the coronavirus pandemic’s consequences. Unemployment increased and broad work-from-home opportunities resulted in a 16.6 percent decline in new vehicle sales in 2020, which resulted in lower automotive battery sales.

The battery manufacturing business is predicted to expand over the next five years, until 2026, as demand from vehicle manufacturers increases as new vehicle sales rise. Meanwhile, technical improvements and the transition to more autonomous cars will almost certainly need the development of new, more sophisticated batteries. Consumer spending on battery-powered gadgets is projected to continue expanding in the future, raising demand for industry goods.

Additionally, during the next five years, depreciation of the US currency is expected to boost export growth. To maintain worldwide competitiveness, operators would very certainly boost their research and development spending in order to produce higher-priced goods, such as hybrid batteries. Over the five years to 2026, the industry’s sales is expected to grow at an annualized pace of 3.2 percent to $12.0 billion. However, future profit development in the business would be harmed by an anticipated rise in the price of some nonferrous metals.

The rechargeable battery industry, which mostly serves the consumer electronics and automobile manufacturing sectors, is likely to have increased demand. Demand for hybrid-electric cars is expected to increase over the next five years as a result of increased environmental consciousness and the introduction of new vehicle types such as electric bikes and motorbikes.

According to the 2019 Annual Energy Outlook published by the US Energy Information Administration, a rising number of light-duty cars are equipped with fuel-efficient equipment (latest data available). For example, between 2018 and 2050, battery-electric car sales in the United States are predicted to climb from 2.1 percent to 14.2 percent of total light-duty vehicle sales. Additionally, light-duty battery-electric, plug-in hybrid electric, and hydrogen fuel cell cars are estimated to account for 6.7% of total light-duty vehicle sales by 2025.

Historically, high battery prices and a lack of supporting infrastructure, such as charging stations, have hampered the proliferation of electric cars. According to Quartz, the most costly component of electric cars is the battery. Reduced battery costs, on the other hand, are likely to increase demand for alternative-energy cars.

Companies such as Tesla Inc. (Tesla), a premium automobile maker, have been investing to drive down the cost of lithium-ion batteries used in electric cars. For example, Tesla’s Gigafactory in Nevada produces approximately 500,000 electric vehicles each year, necessitating a rising reliance on lithium-ion batteries. As the manufacture of electric vehicles increases, bulk manufacture of batteries will likely push costs further down.

Despite lowering lithium-ion battery costs, operators will likely continue to prioritize lithium-ion batteries owing to their premium over other battery types. However, premiums are projected to stay modest over the next five years, as the cost of lithium-ion batteries continues to plummet. Due to the decline in demand for non-rechargeable primary batteries, such as alkaline batteries, manufacturers would be forced to reposition their goods by increasing their investment in product advertising and distribution networks.

Additionally, main battery producers may like to promote the dependability and usefulness of their goods, particularly during emergency scenarios. Manufacturers will also likely follow Duracell Inc.’s example in positioning its goods as environmentally conscientious via its Smart Power Duracell promotion. In a crowded market, businesses are increasingly emphasizing their environmental stewardship in order to capitalize on customers’ environmental concerns and improve sales. 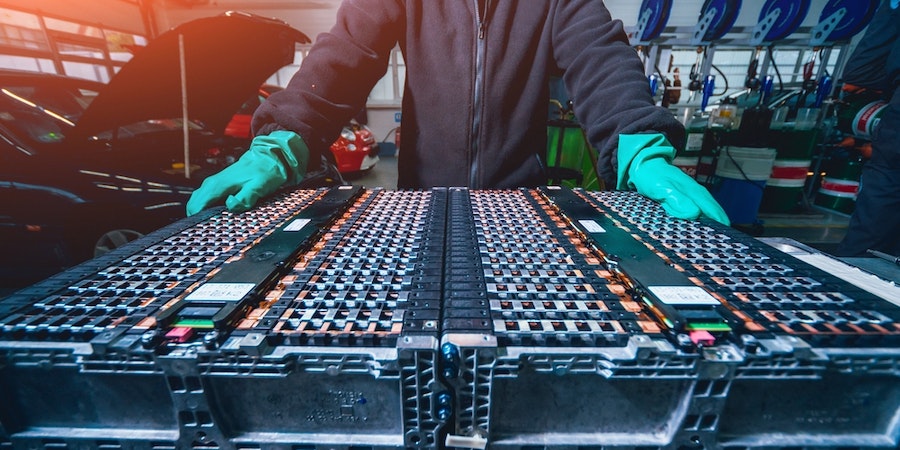 The Battery Manufacturing industry is in the mature phase of its industry life cycle. Characteristics that identify this life stage include clear product segmentation, strong acquisition activity, and market saturation. Industry value added (IVA), a measure of an industry’s contribution to the overall economy, is expected to increase at an annualized rate of 2.1% over the 10 years to 2026.

Comparatively, US GDP is forecast to grow at an annualized rate of 1.9% during the period. While IVA growth is expected to outpace GDP growth, this is predominantly due to the volatile nature of the industry, as a result of its notable exposure to commodity prices, and high import competition.

While there have been technological improvements in industry products, they still fall under clearly segmented categories and are sold to the same downstream industries and consumer markets. The number of establishments in this industry is projected to increase at an annualized rate of 4.8% over the 10 years to 2026. Relatively stable establishment figures reflect the mature and saturated markets served by industry operators.

Industry consolidation is another strong indicator of maturity. For example, EnerSys Inc. has acquired multiple US companies over the five years to 2021 to reduce competition and grow its production size. Most recently, Spectrum Brands Holdings Inc. has exited the industry following the sale of its battery segment to Energizer Holdings Inc. during the first quarter of 2019.

Due to the need to constantly improve products to stay competitive, acquisitions can be an extremely cost-effective way to improve technology and expand a company’s product portfolio. Additionally, operators benefit from vertical integration, both upstream and downstream, and increasing competition over the 10 years to 2026.

For instance, Tesla Inc. (Tesla), which sells luxury electric cars, in partnership with Panasonic Energy of North America, created a vertically integrated battery pack facility to decrease the per-kilowatt-hour cost of their battery packs. By decreasing the price of its lithium-ion batteries, Tesla has been able to expand into new markets, such as storage battery stations for homes.