The industry of Bare Printed Circuit Board Manufacturing, which includes enterprises that make bare printed circuit boards (PCBs), is expected to contract during the five years through 2020. The sector has lost its worldwide competitiveness, owing in part to a high US currency and a dwindling US industrial base. Due to the fact that PCBs are used as components in other completed goods, PCB producers must be located nearby to other manufacturers, notably in East Asia.

Additionally, the repercussions of COVID-19 have significantly harmed the US manufacturing base and hence the future of this sector. Taking these variables into consideration, research forecasts that industry sales would fall by 2.6 percent annually to $3.9 billion in the five years to 2020. This reduction includes a projected 13.7 percent reduction in 2020 alone.

The US dollar has strengthened during the last five years, as demonstrated by a rise in the trade-weighted index (TWI), which gauges the dollar’s strength against the currencies of its main trading partners. A stronger US currency makes it more difficult for US businesses to compete against overseas rivals.

The research anticipates that the sector will continue to decrease over the next five years through 2025 as import penetration increases. The industry, on the other hand, is forecast to contract at a slower pace, owing partly to an anticipated recovery in economic activity.

Additionally, private investment in computers and software is likely to increase over the next five years, helping the sector recover from its recent fall. Nonetheless, the local sector will continue to be disadvantaged as long as East Asian nations continue to dominate manufacturing. As a consequence, the research estimates that industry sales would fall by 1.4 percent annually to $3.6 billion in the five years to 2025.

The Bare Printed Circuit Board Manufacturing industry manufacturers circuit boards for various downstream uses including consumer electronics, high-end electronics (medical, scientific, and military equipment), and automobiles, among others. Over the five years to 2020, the industry has contracted as a result of heightened competition and adverse currency fluctuations.

In addition, the industry has become less profitable as a result of pricing pressures brought about by intense competition as well as fluctuating input costs. As a result, the research estimates the industry’s average profit margin, measured as earnings before interest and taxes, to decline from 5.1% of revenue in 2015 to 4.5% in 2020.

Since this industry’s products are so ubiquitous, the broad contraction in economic activity resulting from the pandemic is expected to sink the industry’s prospects in 2020. This strong decline in revenue is comparable to that exhibited during the previous recession. The broad decline in manufacturing capacity utilization points to the severity of the crisis and thus the loss of demand for industry products.

Over the five years to 2020, the Bare Printed Circuit Board Manufacturing industry continued its long-standing trade deficit. Although the industry has historically contended with low-cost imports from Asian markets, unfavorable currency fluctuations exacerbated the industry trade deficit during the current period.

In particular, the trade-weighted index, which measures the value of the US dollar against the currencies of major trading partners, increased substantially in 2015 following the first interest rate hike by the Federal Reserve since the financial crisis. As the Federal Reserve shifted to a tighter monetary policy, the value of the trade-weighted index increased 11.5% in 2015 alone.

As a result, domestically produced goods became less competitive in international markets given the greater value of the US dollar. Moreover, with increased buying power, demand for bare printed circuit boards became increasingly satisfied by low-cost imports due to their lower effective cost. Overall, the Bare Printed Circuit Board Manufacturing industry contended with several years of difficult operating conditions as a result of an appreciated US dollar.

Import penetration represents the most significant source of competition for industry operators. Research forecasts imports’ share of domestic demand to remain high at 39.5%. Total imports exhibited their most substantial year-over-year increases in 2015 and 2018. The run-up in the dollar in 2015 largely explains the comparable increase in industry imports, with total imports increasing 4.7% in 2015 alone.

However, the most significant increase in total imports occurred in 2018 as foreign producers, primarily from China, imported higher volumes of circuit boards in anticipation of increased protectionary tariffs. Overall, these events are expected to drive the value of total imports to decrease an annualized 2.6% to $1.9 billion over the five years to 2020.

While such economic events have been beneficial for importers, industry exports have suffered. Over the five years to 2020, research expects industry exports to decline an annualized 6.0% to $967.0 million. The decline in exports is primarily due to the greater effective cost of domestically produced goods as a result of the strength of the US dollar. Furthermore, total exports are expected to decline at a faster rate than industry revenue during the current period. As a result, the export share of industry revenue is expected to decrease from 29.5% in 2015 to 24.7% in 2020.

The trade-weighted index (TWI), which gauges the strength of the US dollar relative to the currencies of its main trading partners, is forecast to fall, which would likely benefit domestic industry to a degree. Nonetheless, given the majority of the world’s circuit boards are made in East Asian nations, the sector will continue to be distinguished by its enormous trade imbalance.

The economic recession brought by the public health crisis has significantly affected industrial businesses’ demand for electronics and capital expenditures. As a result, industrial capacity utilization rates have decreased, necessitating the use of fewer inputs.

Additionally, supply chain disruptions and China’s manufacturing sector’s rapid recovery are projected to dampen domestic industrial activity. As a result, imports will continue to meet a significant portion of domestic demand. Nonetheless, the sector’s bright spots will include sales to military and aerospace firms, which are growing in importance as customers for this sector.

Additionally, businesses that specialize in military contracts often have a higher profit margin than the industry average. In aggregate, the industry’s fate is heavily dependent on the extremely unpredictable recovery of the US manufacturing sector over the next several years.

The Bare Printed Circuit Board Manufacturing sector is predicted to have more moderate trade developments throughout the five years to 2025, compared to the preceding five-year period. This is partly owing to the fact that the TWI will remain relatively stable over the next five years. The TWI, in particular, is expected to decline at an average rate of 1.8 percent throughout the five-year period ending in 2025.

This is a positive development for the sector since it increases the competitiveness of exports in foreign markets. Exports of the sector are expected to fall by an annualized 0.9 percent to $924.0 million during the five years to 2025. As a result, the export portion of income is expected to modestly grow from 24.7 percent in 2020 to 25.3 percent in 2025. 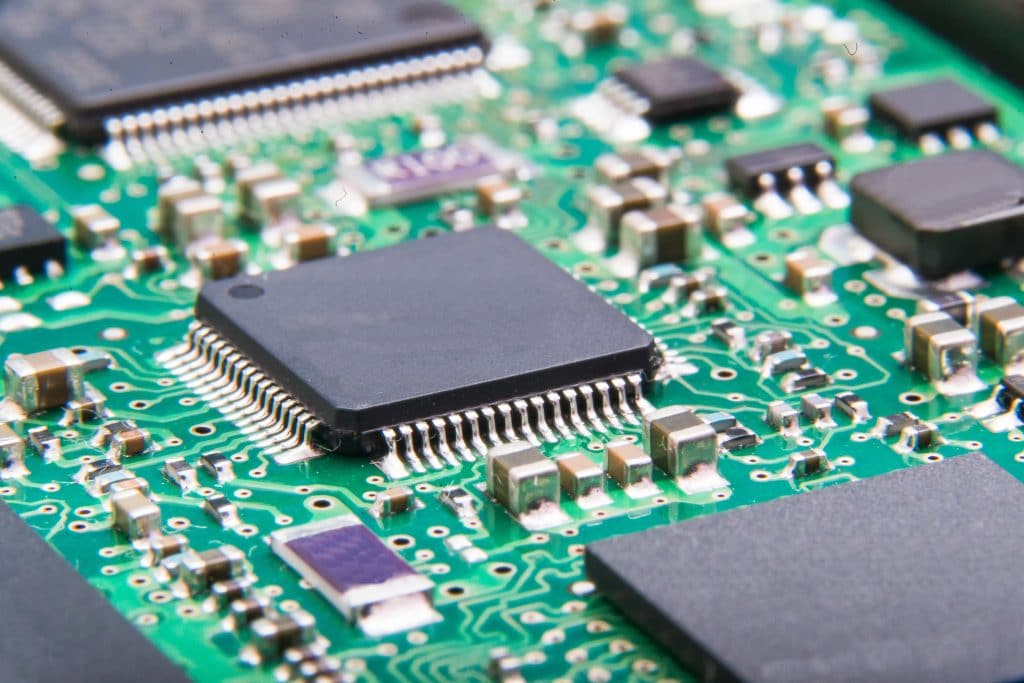 This sector produces bare printed circuit boards (PCBs), a critical component of electronic production. Bare PCBs are distinguished from other types of PCBs by the absence of electrical components such as transistors or capacitors. Electronics manufacturers customize bare PCBs with electronic components to fit their unique product requirements. Producers create bare PCBs by laminating conducting layers (for example, copper foil) and dielectric layers (for example, Teflon) together with epoxy glue.

The industry of Bare Printed Circuit Board Manufacturing is in decline. Industry value added (IVA), which quantifies an industry’s contribution to the entire economy, is anticipated to fall at a 2.1 percent annualized pace during the next decade through 2025. In comparison, the US GDP is expected to rise at an annualized rate of 1.6 percent for the same time.

Consistently lower yearly IVA growth than GDP growth is often symptomatic of a failing sector since the sector acts as a buffer rather than a contributor to overall economic growth. Additionally, industry operations are increasingly relocating operations abroad, which significantly contributes to the industry’s decline; for example, the research expects the number of industry establishments to decline at an annualized rate of 3.7 percent to 352 domestic locations over the ten years to 2025.

By and large, the industry is in decline, as shown by its constantly falling prospects for profitability. As long as foreign manufacturers continue to take advantage of the multiple competitive advantages available in specific nations, local businesses are likely to face significant rivalry.

Nonetheless, taxes on low-cost Chinese imports are projected to alleviate the industry’s negative status; however, further tariffs are unlikely to change the industry’s present course. Recent economic impacts of the COVID-19 epidemic will worsen the industry’s collapse.