Automobile Transmission Manufacturing has declined throughout the five years through 2020, owing mostly to falling demand in 2020. The industry as a whole is inextricably related to the success of automobile manufacturers. Domestic vehicle manufacturing grew most of the time, owing to better economic circumstances.

Increased discretionary income, along with expanded financing options, enhanced consumer mood and encouraged customers to buy large-ticket products such as automobiles. However, with the emergence of COVID-19 (coronavirus), these trends reversed in 2020, resulting in a significant fall in new automobile sales and manufacturing.

As a consequence, original equipment manufacturers (OEMs) are likely to place a much lower demand on industry operators for transmissions. Thus, industry revenue is expected to shrink at a 3.0% yearly pace to $35.0 billion during the five years to 2020, including a 14.7 percent loss in 2020 alone.

Over the last five years, lower gasoline costs have aided in the change of customer choice away from sedans and toward light trucks. While transmissions contribute significantly to fuel economy optimization, which is usually associated with smaller automobiles, operators earn more cash from gearboxes for trucks. However, businesses must ensure that truck transmissions continue to fulfill ever-changing regulatory criteria.

To do this, leading manufacturers have concentrated their efforts on technology such as dual-clutch and eight-speed gearboxes. The rising importance of hybrid and electric cars has also affected technical advancement, which has the potential to have a significant impact on the industry in the future.

Revenue for the business is expected to increase rapidly over the next five years to 2025, as macroeconomic health rebounds after pandemic-induced lows. Automobile demand is likely to increase as consumer morale improves, borrowing rates remain low, and disposable income is restored.

As demand for new automobiles increases, vehicle manufacturers are anticipated to change their production schedules correspondingly, boosting output and so necessitating the purchase of more gearboxes. While electric cars may represent a challenge to existing transmission manufacturers, automakers may choose to delay entry into this market until 2020 profit margin reductions are recovered. Over the five years to 2025, revenue is expected to grow at an annualized rate of 3.2 percent to $41.0 billion.

The Automobile Transmission Manufacturing industry’s revenue has decreased throughout the five years through 2020, owing mostly to the industry’s precipitous revenue reduction in 2020. By and large, industry income is directly proportional to demand for vehicle manufacturing and new vehicle sales. Almost every automotive, with the exception of electric cars, need a gearbox.

Initially, increased consumer sentiment and disposable money encouraged individuals to make significant discretionary purchases, such as vehicles. One factor that aided the business was falling gasoline costs, which increased demand for light trucks and sport utility vehicles, which are deemed more affordable during times of low oil prices.

While economic circumstances remained favorable for most of the decade, these trends abruptly changed direction in 2020. The epidemic of COVID-19 (coronavirus) has wrecked the global economy. As infection rates and mortality grew, impacted state governments implemented regulations aimed at restricting the virus’s spread.

This included stay-at-home orders and limits on the kind of enterprises that may continue to operate. As a consequence of the decline in corporate investment and consumer mood, many US residents started filing for unemployment at alarming rates as non-essential enterprises closed.

As unemployment increased and macroeconomic activity slowed, residents’ disposable income decreased, making major discretionary purchases such as automobiles and light-duty trucks less probable. As a consequence, research projects that new vehicle sales would decline 16.4 percent in 2020 alone, resulting in a 3.9 percent annualized decline in new vehicle sales over the next five years through 2020.

Additionally, several automakers, who are significant downstream clients of industrial firms, chose to shut down factories during the first epidemic. While the majority of plants have reopened, light vehicle manufacturing has decreased significantly in 2020. Thus, industry-related revenue has decreased by an average of 3.0 percent to $35.0 billion during the five years through 2020, including a 14.7 percent reduction in 2020 alone.

Economic recovery is predicted to boost the Automobile Transmission Manufacturing industry’s performance during the next five years through 2025. Macroeconomic trends are expected to reintroduce automotive manufacture in the future. Unemployment is expected to drop as interest rates stay at record lows, implying an improvement in consumer mood.

As consumer confidence recovers, large-ticket purchases, such as autos, are expected to follow. As a consequence, research forecasts that industry sales will resume growth in the five years to 2025, expanding at an annualized pace of 3.2 percent to $41.0 billion.

Consumer mood is anticipated to be bolstered further by the continuation of low borrowing rates. With rates being low for the most of the forecast period, increasing financing choices and credit availability should stimulate consumers to spend on large-ticket discretionary goods such as automobiles. In aggregate, these economic factors should increase demand for vehicle production, hence boosting the industry’s performance.

As demand recovers over the next five years to 2025, corporations are expected to continue exploring production capacity savings. Automakers’ production plans allow them to respond quickly to demand fluctuations, given that the actual assembly process takes less than 20.0 hours, depending on the factory’s size. This greater emphasis on innovation and efficiency in manufacturing is projected to reduce the demand for workers.

Despite greater production efficiency, operators are likely to need a significant increase in staff to fulfill growing demand. As a consequence, employment in the sector is expected to grow at an annualized rate of 2.1 percent to 73,769 jobs during the five years to 2025. This yearly rise is expected to be driven mostly by a rebound in 2021 after lows caused by the COVID-19 (coronavirus) pandemic, although operators will likely reduce employment in later years as improved automation reduces the need for certain peripheral personnel.

While reduced hiring in the latter years is anticipated to enhance profit, input costs are predicted to rise quickly in the coming years, posing a threat to profitability. Sustaining a low profit margin is predicted to maintain low industry participation rates. Thus, during the five years to 2025, the number of industrial businesses is expected to decline at an annualized rate of 0.1 percent to 353 firms.

The US dollar is predicted to weaken during the next five years, with the trade-weighted index declining an annualized 1.5 percent. Nonetheless, following a severe fall in 2020 due to interrupted global commerce, industrial imports are expected to rise as prior stresses on global supply chains and international commerce are alleviated. Over the five years to 2025, the value of industrial imports is predicted to expand at an annualized rate of 2.4 percent to $14.6 billion.

However, operators may become less reliant on cheaper Mexican labor over the forecast period as a result of the United States-Mexico-Canada Agreement (USMCA). By 2023, a fundamental part of the agreement stipulates that 40.0 percent of the product value of a finished automobile be made by employees earning at least $16.00 an hour. As a consequence, many operators may be obliged to return to the United States, resulting in a decline in import quantities.

Additionally, a predicted decline of the US currency could strengthen overseas consumers’ spending power, boosting demand for autos in emerging countries. As a consequence, exports are expected to grow at an average rate of 3.7 percent to $9.1 billion during the next five years to 2025.

CAFE vehicle requirements are projected to have an impact on industry production processes in the future as more vehicle platforms demand hybrid and fuel-efficient technology. The Obama administration established these criteria, demanding that vehicles and light trucks achieve an average fuel efficiency of 54.5 miles per gallon by model year 2025.

The Trump administration, however, has chose to freeze CAFE rules at 37.0 miles per gallon, citing worries from automakers over invasive potential costs. Nonetheless, during the next five years, higher regulations for vehicle efficiency and fuel economy are likely to benefit technical advancements.

However, fully electric cars (EVs) may put a damper on gearbox sales. Due to the way electric motors operate, EVs need less transmission than combustion-powered cars. Gas engines generate varying amounts of torque each engine revolution, depending on the engine’s revolutions per minute (RPM). Transmissions are designed to maintain engines operating at their most efficient RPM range at all driving speeds in order to optimize fuel economy.

Electric motors, on the other hand, create almost the same amount of torque at all RPMs, eliminating the need for a gearbox. As CAFE regulations increase, more manufacturers are projected to shift manufacturing to electric vehicles, eroding sales of conventional engine goods.

EVs are presently more costly than gasoline-powered vehicles, owing partly to the high cost of the lithium ion batteries used for power reserves, however battery costs are expected to decline significantly over the next five years. While demand for electric vehicles is predicted to increase over the next decade, the average price is not likely to fall low enough to effect the majority of household and commercial vehicle sales until 2025.

Additionally, manufacturers face significant development costs associated with EV technology. OEMs may delay their drive for EVs until their financial sheets recover from the impacts of the coronavirus outbreak in 2020. 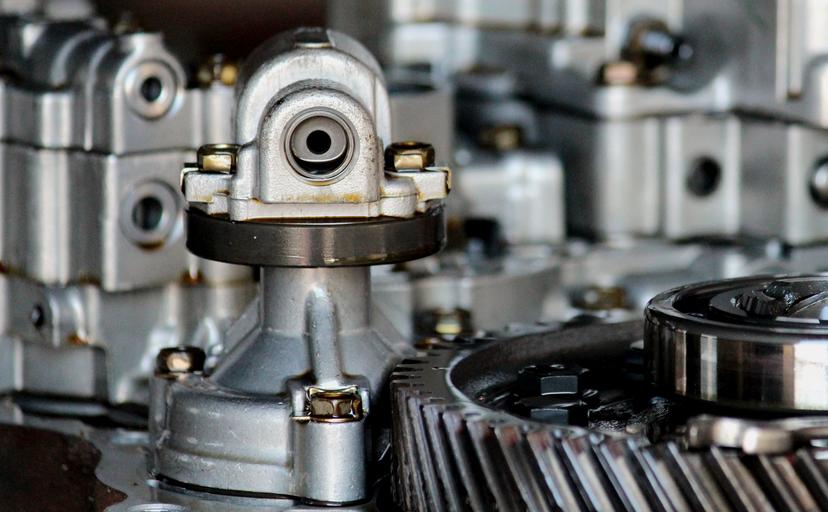 This industry produces gearboxes for motor vehicles (cars, light-, medium-, and heavy-duty trucks), transmission components, and powertrain components. Clutches, gears, differentials, and axle bearings are all examples of industry goods. Automobile Transmission Manufacturing is at its mature stage of development.

Industry value added (IVA), a proxy for an industry’s contribution to the economy, is predicted to decline somewhat by 0.5 percent annually during the next decade through 2025, compared to annualized US GDP growth of 1.9 percent over the same time.

Although industry IVA growth has been slower than the general economy over the last decade, this does not indicate a dying industry. The sector is predicted to consolidate gradually over the next decade, with the number of firms declining by an annualized 1.3 percent.

Rather than shifting client expectations, one of the key drivers of technology innovation within the sector has been increased regulatory norms. This is a positive sign for industry demand and a sign of a mature industry.

Additionally, by selling complex systems and modules rather than individual components, suppliers have undertaken many of the duties previously handled by car manufacturers in terms of design, engineering, research and development, and assembly.

This has resulted in the introduction of new technologies, particularly in response to regulatory and legislative needs. Car component suppliers are becoming an increasingly critical component of the automotive production process.

As a consequence, the Transmission Manufacturing industry’s development is inextricably linked to the expansion of the automobile, truck, and specialty vehicle manufacturing sectors. These industries have a significant correlation with general economic growth, indicating that they are mature.